After due consideration and deliberation we decided that young Mitch Kay would race an F3 MV Agusta in club events next year. We already had an F3 imported direct from Italy, which had sat in the garage for 6 months awaiting the time and energy to go through the ordeal of obtaining Road Legal documents (Log Book). This is the machine that will have its expensive suit of clothes removed and replica fibreglass fitted. 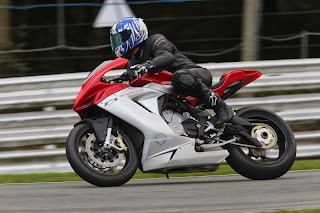 To make sure the machine would be suitable, a track day was booked for Wednesday 25th September. Good value for money as we are allowed up to 8 x 20 minute sessions on the track.
The only two modifications were carried out, one was to fit an Arrow silencer which might have spoilt somewhat the looks of the bike, but it had to be done to meet noise levels.

MV Agusta please note: why manufacture a road/race machine with a label glued to the headstock stating 106 D.B at 7000 RPM?  Most British, and for that matter, most continental tracks have maximum noise levels of 102 or 105 Db with some as low as 95 Db 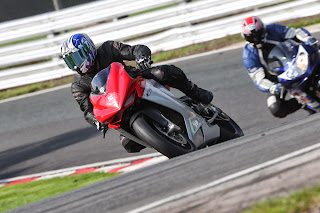 In any event when tested with the Arrow silencer the bike registered 101 Db
Our other pre-track problem was to overcome the horrendous midrange fuelling.
We installed a power commander module set the unit on the dyno which seemed to vastly improve the situation.  So off to adventures anew. 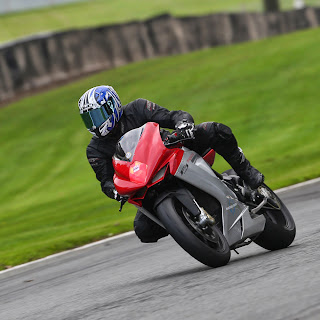 If we built bikes as accurate as the weather forecast, we would have gone out of business 20 years ago. The forecast was light drizzle until 8am then glorious sunshine. The reality being at 9am for 2 hours continuous heavy rain. I think MV's are rain magnets!

However Mitch went out in the rain to do a few sighting laps to learn the track but with standing water, we learnt nothing about handling the bike. So to Plan 'B', walk across the park to the cafe for breakfast and waited for the rain to stop.  About 12 noon the track started to dry, so Mitch went out and did a 20 minute session reporting back to base. He started the bike, pulled wheelies over every bump, but when the wheel lifted, the bike violently shook its head. No steering damper was fitted by the factory, so an after market item will have to be found.

After doing a couple more sessions, Mitch was really impressed with the torque of the engine. Also, the faster he went the better the bike seemed to handle. The power commander had also sorted the major fuelling problems. It was stated the F3 was or could be a very competitive racing motorcycle, some praise from a R6 Yamaha fanatic.

We all look forward to the 2014 racing season, so in the meantime, take care.