I watched the documentary on Aryton Senna a few weeks ago, and found myself drawing a parallel of his racing career with that of Marc Marquez, the giant young talent in Moto GP. This thought struck me while watching the Australian GP.
Senna had a mantra that if he was to race, he raced to win! During his career he crossed swords with Alain Prost the 'French Professor'. It came to a head when Senna won pole at the Japanese GP and the authorities changed pole to the dirty side of the track, which was the opposite side to the previous year when Frost held pole.

During the documentary it was obvious that the head of the governing body, a french man, favoured Prost, much to Senna's disgust. Senna made the statement "If at the start I am at the corner first, I will not give track position to Prost" the inevitable happened and they both crashed out of the race.

Senna asked the question at the inquiry to the incident " How was it over many years, it was he who was always in the wrong and everyone else appeared to be angels" 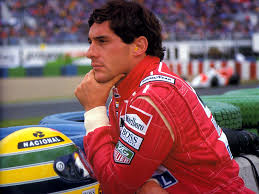 Watching the programme, you could not help feeling he was unfairly victimized.

Marquez, a Rookie in Moto GP rode with sensational flare, throughout 2013 requiring only eight points more than Lorenzo to take the title in Australia.

He had already been given three penalty points for so called dangerous riding, another would mean starting from the back of the grid. He was alleged to have caused the crash of Pedrosa in Aragon by hitting the traction control unit on Predrosa's bike, caused by slight contact during an overtaking manoeuvre. Marquez was off the track when Pedrosa was high sided, by giving his bike a fist full, expecting the traction control to do his riding and too his surprise...didn't.

Like the judgements made against Senna it was stated " If it had been anyone else, it would have been viewed as a racing incident, but seeing that Marc had already two penalty points for so called rough-shod riding an example had to be made".
No penalty points for Lorenzo's antics in Sepang.

Then we arrive at the Aussie GP. The tyre manufacturer had supplied tyres " not fit for purpose" they were well below the acceptable standard! The organisers therefore ruled that after ten laps, all riders had to pit and change to their second bike.

Pedrosa pitted after 9 laps, Lorenzo after 10 laps and Marquez, for what ever reason after 11 laps. His tyres were still on the pace even though worn, but he was black flagged for breaking the new rules.

At the Aussie GP there was only 35,000 spectators, the championship all but sown- up. But after this 'Black Flag' only 18 points separated Marquez and Lorenzo, with 50 points up for grabs in the last two GP's, thereby probably ensuring a full house in Japan. 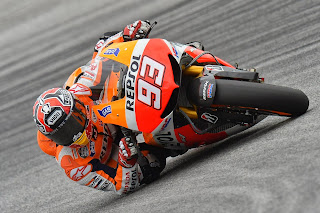 Marc Marquez
As Senna stated " When he started racing there was no politics, you raced to win and the first to cross the line was the winner".
Not so today, both car and motorcycle sport is manipulated by the controlling bodies and the media. It is done to keep spectators and viewers interested if possible till the last race of the season.
Go for it Marc and win the 2013 championship. You well and truly have earned the right to be world champion!﻿
Posted by Black Eagle Racing Team at 9:50 AM