A bit of a Rant

Wednesday the 13th November M.C.N gave a preview of the New M.V. It was stated by Giovanni Castiglioni the Boss man of MV Agusta that this is the companies first touring bike. Why don't the present owners, whoever they may be, learn the history of their company.

In 1950 Agusta produced a prototype 500cc Turismo for the Milan show, nothing was heard further about its development and was forgotten. However in 1965 an across the frame 4 cylinder 600cc Touring Machine was shown again at the Milan show, this time it actually made production and was sold world wide until 1980. It was the worlds first production across the Frame 4 cylinder motorcycle and MV Agusta 1st touring machine.

It never sold in the expected quantities as general public desperately wanted an MV that looked like the red and silver Race bikes. This failure was soley to the bikes hideous looks being the first of its kind, it had no competition but still failed.

The photo of the new Turismo Veloce 800 has brought MV Agusta full circle from the sublime to the ridiculous. Not like the MV's original Touring bike this has serious competition from many, many major companies with years of mass producing touring bikes. The article states the bike went from virgin design to the finished production bike in just eight months. You have to admit that they could have used "Lego" blocks and achieved a better looking bike, Hey Ho! 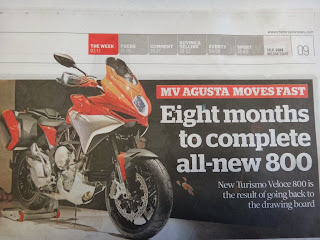 If Castiglioni thinks as stated "This is the first touring model this company has ever  made but in our opinion it is the best MV Agusta we have ever made!" If this is the future standard of MV Agusta's products save all the agony and shut the company now it has no future. If this is the best, the Lord only knows what he thinks about the previous MV Agusta's he has let loose on the general public.

I am not anti MV Agusta my family own and ride a Brutalie, three F4's and will race an F3 next season. We have owned MV's for 35 years. If we any humbly suggest stick to what you know and let your Chinese partners produce the mass produced commuters.

On a very much brighter note, Young Marc Marquez did the business and and must have been told "Points make Prizes". World Champion at 20 years with a fist full of world records to boot. Fabulous, Fantastic and very much well deserved. 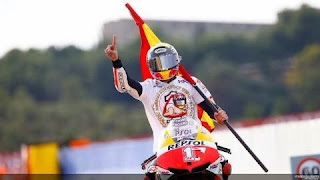 ﻿Finally, if you want to see what Agusta used to race. our 500 MV will be on the I.O.M tourist boards stand at the NEC, Friday till the 24th November. See you there!