The trip to East Fortune, Scotland, was wet, very wet.  The meeting was cancelled on the Sunday Lunch.  We were however able to rectify a fault with the MV.

The MV 3 Cylinder was OK for Brian’s 6 or 7 laps, but when yours truly finally had the courage to go trackside on a wet track with heavy rain the engine would not pull above 5 thousand revs.

After a lot of larking about with jets and needle positions the fault was with the floats.  These are made from two pressed halves of brass soldered together.  These were leaking big time and allowing petrol into the float body.

On examination the ethanol in the fuel had attacked the solder and, as a by- the- way, ethanol also attacks magnesium, so much for the pasture grown petrol!  The World is starving so lets keep the land for crops.

On the way home 350 miles of boredom, Mark driving, we got to reading Alan Cathcart’s article on Gilera in Classic Racer.  Now here’s a conundrum – how do you get 4-one piece rods on a one piece Crankshaft?  Answer – you don’t!  The Crankshaft is made in five parts and pressed together after the conrods have been installed.

One other little matter – all MCN Road Tests state the handling of the latest MV4 and 3 Cylinder motorcycles is greatly improved by the backward rotating crankshaft as though the manufacturers have just seen the light and had a vision from God.

Our Gilera Grand Prix bike 1957 has a backward rotating crankshaft.  For the simple reason the chain is on the right and the engine drive socket is fitted to the end of the mainshaft.  At the other end of this shaft is the Primary Gear, which is directly driven by the Crankshaft.  This also applies when the shaft drive unit is removed from the 4 cylinder Road bikes and replaced by the chain drive conversion.  As they say nothing is new in motorcycle engine construction, it’s all been tried before!

If you are going to the Classic Club Donnington Track meeting in August, make yourself known to us, you are more than welcome. 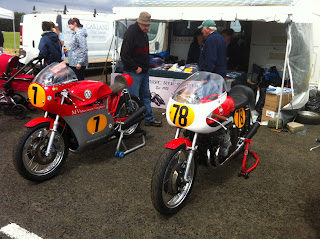 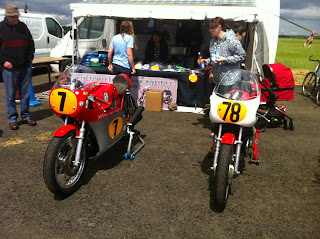 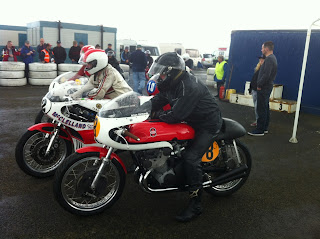 Posted by Black Eagle Racing Team at 4:49 AM